How to use your iPod Touch as an alarm clock

One of the annoying features of the iPod Touch is the fact that you can't use music from the library as the alarm clock sound (the iPhone allows you to select ringtones but since the iPod Touch doesn't support ringtones it doesn't help).

I tried some alarm applications from AppStore but non of them worked (after the iPod is locked, 3rd-party applications can't activate it), the only method I found was to disable the iPod's auto-lock-after-X-minutes feature and just keep it on the whole night, but I didn't like it so I just gave up and kept using my cellphone as an alarm clock.

It's not the perfect solution, but it works.

The first step is to start the built-in alarm application and to set an alarm: 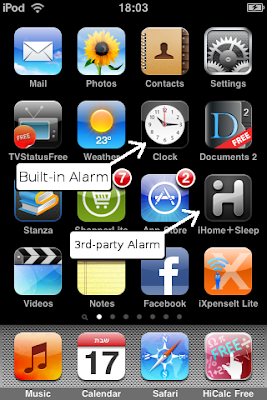 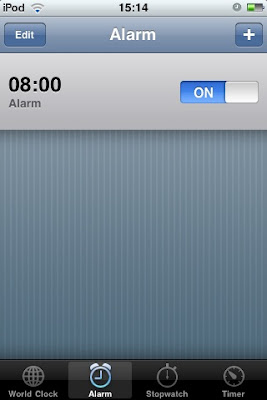 It's important to make sure that the alarm you added is set to "ON".

The next step is to open "iHome+Sleep", add a new "Sleeping Card", set the wakeup time and wakeup music and slide the card into the socket at the bottom: 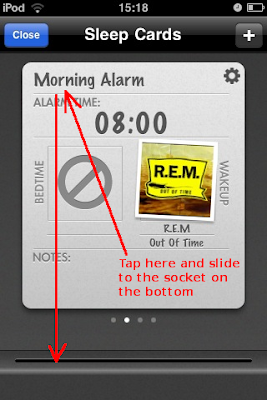 The last step is to drag the "Bedtime" button to the right (so it changes to "Wakeup") and then lock the iPod (using the top-left hardware button): 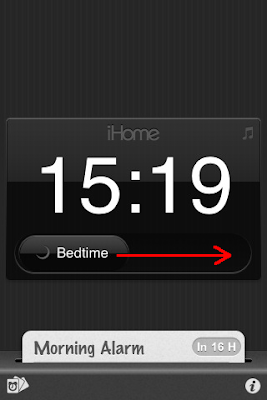 The only catch is that the 3rd-party alarm application has to be the last active application before you lock the iPod (otherwise it won't start).

iHome+Sleep is also very useful if you like falling asleep with music in the background (just set the "Sleep-to" music and the "Sleep Timer" in the sleeping card).

Next:How to select a WPF TreeViewItem from code